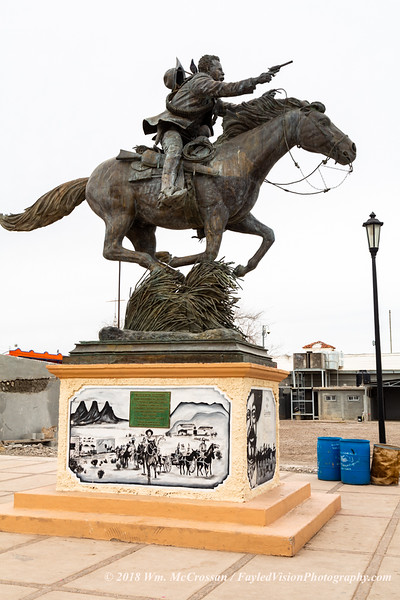 Puerto Palomas de Villa, also known simply as Palomas, is a small town of 4,688 people in the municipality of Ascensión, in the Mexican state of Chihuahua. It borders the village of Columbus, New Mexico, in the United States. Pancho Villa launched his attack on Columbus, New Mexico, on March 9, 1916, from Palomas. In retaliation, the United States launched the Pancho Villa Expedition, under General John J. Pershing, to capture him. Notwithstanding more than a year of effort, including one of the first large-scale uses of motorized transport by the U.S. Army, Pancho Villa was not captured. During this campaign, a young Lt. George S. Patton, later to be known as General Patton, became famous. During his service and accompanied by ten soldiers of the 6th Infantry Regiment, Patton killed two Mexican leaders, including "General" Julio Cárdenas, commander of Villa's personal bodyguard. For this action, as well as Patton's affinity for the Colt Peacemaker, Pershing titled Patton his "Bandito." Patton's success in this regard gained him a level of fame in the United States, and he was featured in newspapers across the nation.