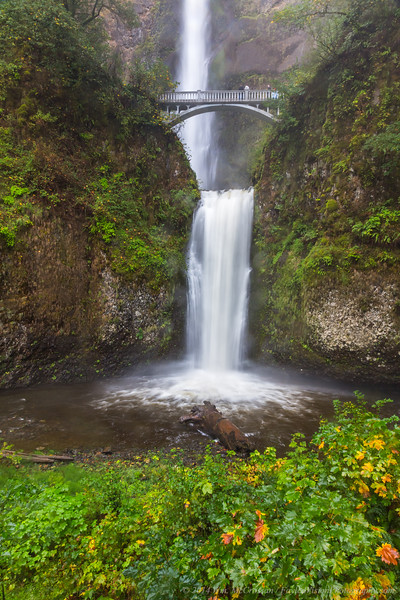 Multnomah Falls is a waterfall on the Oregon side of the Columbia River Gorge, located east of Troutdale, between Corbett and Dodson, along the Historic Columbia River Highway. The falls drops in two major steps, split into an upper falls of 542 feet (165 m) and a lower falls of 69 feet (21 m), with a gradual 9 foot (3 m) drop in elevation between the two, so the total height of the waterfall is conventionally given as 620 feet (189 m). Multnomah Falls is the tallest waterfall in the state of Oregon. It is credited by a sign at the site of the falls, and by the United States Forest Service, as the second tallest year-round waterfall in the United States. However, there is some skepticism surrounding this distinction, as Multnomah Falls is listed as the 137th tallest waterfall in the United States by the World Waterfall Database (this site does not distinguish between seasonal and year-round waterfalls). A foot trail leads to Benson Footbridge, a 45-foot (14 m)-long footbridge that allows visitors to cross 105 feet (32 m) above the lower cascade. The trail continues to a platform at the top of the upper falls where visitors get a bird's-eye view of the Columbia Gorge and also of "Little Multnomah", a small cascade slightly upstream from the "upper" falls, which is not visible from ground level. The Mark O. Hatfield Memorial Trail starts at the falls and continues through the Oregon side of the Columbia River Gorge to Starvation Creek. The footbridge is named for Simon Benson, who financed the bridge's construction in 1914 by Italian stonemasons.